What’s it really like to be a Private Investigator. Behind the scenes look with a real P.I.

What is it really like to be a Private Investigator? I like to describe it this way… 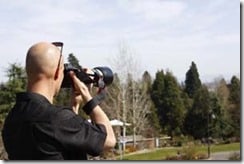 I tell people, if you followed me around with a camera all week long, you could probably get enough for a little half hour reality television show that people would find watchable. Maybe not 30 minutes of interesting things. But if you cut out for commercials and you followed me around all week, you might get 22 minutes of video that’s somewhat interesting enough to follow from week to week. But I want you to think about what that means…

That means if I actually do 22 hours of work as a private investigator, you’re only getting about one minute out of every hour that someone would find interesting!

As a private investigator, you’re going to do a lot of preparatory work on computer which means you’re going to be sitting in front of the computer screen. Maybe looking at maps, preparing for surveillance, doing background checks, finding various information. It’s very, very interesting to me as I’m doing it. I love pulling on the threads of a case and looking at different angles when I’m preparing for surveillance. I’m looking at where the intersections are, how traffic moves, those types of things.

If I’m doing a background check, I love to be able to find the little thing that everybody else missed or the information the client will be surprised that I came up with. It can be interesting work but it’s not the type of thing that would necessarily translate well to television.

And then, you have the surveillance work itself. During the course of a surveillance, you’re going to get 45 or 90 seconds of surveillance footage that’s interesting and intriguing. On a worker’s compensation case the classic type of video you’re going to get is that 90 seconds of the guy doing what he is not supposed to do. Maybe lifting bags of mulch, taking down Christmas tree lights, those types of things. Maybe swimming, jumping or some even more egregious activities.

On an infidelity case where the cheating husband is the subject of the investigation, you’ll get the ninety seconds of him meeting “the other woman”, giving her a peck on the cheek and going into a motel room.

But for every 90 seconds of that video you get, you might have 6 or 8 hours of sitting and waiting for that type of thing to happen!

The routine things, the day-to-day things, are going to seem (from an outside perspective) to be very long and boring. And I’m not going to lie to you, surveillance can get very long. But if you’re doing it right, if you’re doing it well, it can still be interesting. Plus, you might be able to listen to a little bit of radio in an earpiece or a book on tape, something like that. Don’t read but you can listen to a book on tape. But you should also be very alert…

You’re going to be constantly looking at how traffic is moving. People who bicycle by in the evening in suburban areas. People starting to jog and walk their dogs in the evening. In the morning, as you’re sitting there at dark and as it becomes dawn, people begin to come out to go to work. You need to be very conscious and aware of the people around you and the sounds you’re making.

Private investigation work can be very interesting. But it can be somewhat routine.

As I read Superman comics growing up, it always amazed me how Superman would catch bad guys using different methods.

You’re going find that you use some of the same tricks and techniques over and over again. And as interesting as that is, from an outside perspective it may seem like the same thing week after week. Of course, I guess COPS has done that for years! Humm. Maybe I’m underestimating what people find interesting. Anyways…

And from the outside, the first time you see it it’s pretty darn cool. The next couple of time you see it you say, “That’s kind of clever”. But if you tune into a television show and the guy’s pulling the same trick again this week… well, it can become routine. However…

For you as an investigator, it will still be very intriguing! I mean, it’s not too dull when you’re basically out there to hunt humans! For you it will be a rush every single time.

So, what’s it really like to be a private investigator? Not glamorous. Definitely not. But it can be fun. And definitely interesting. From a purely academic point of view, you will be using the same tactics and tricks over and over again. But this is not a bad thing! The nice thing is you don’t have to learn a new thing every week, a new trick every time. You learn a handful of things that work for you and you use them!

The original article can be found at http://surveillancetrainingcourse.com/whats-it-really-like-to-be-a-private-investigator-behind-the-scenes-look-with-a-real-p-i/ Author Larry Kaye September 23rd, 2013