Students across the United States will join a national march to call for tighter gun control and to highlight the issue of school safety.

The March for Our Lives was organized by pupils at the Marjory Stoneman Douglas High School in Florida, where a former student is accused of killing 17 people last month.

The shooting, one of the worst in US history, renewed debate about gun laws and the rights of gun owners.

What do young people think about gun control? 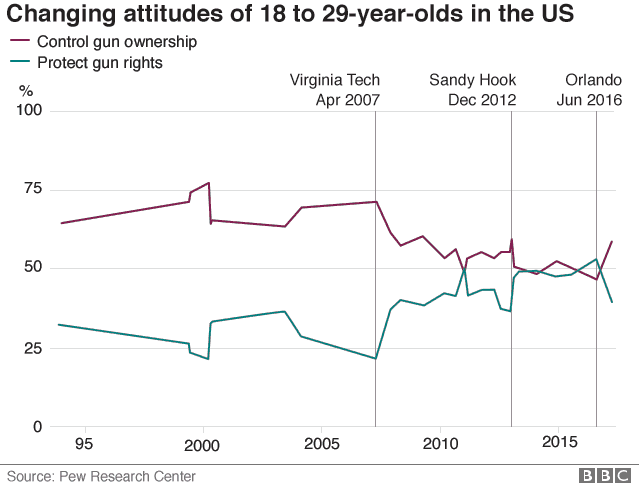 When looking at the period before the Parkland shooting, it is interesting to track how young people have felt about gun control.

Pew found that one third of over-50s said they owned a gun. The rate of gun ownership was lower for younger adults - about 28%. White men are especially likely to own a gun.

How does the US compare with other countries? 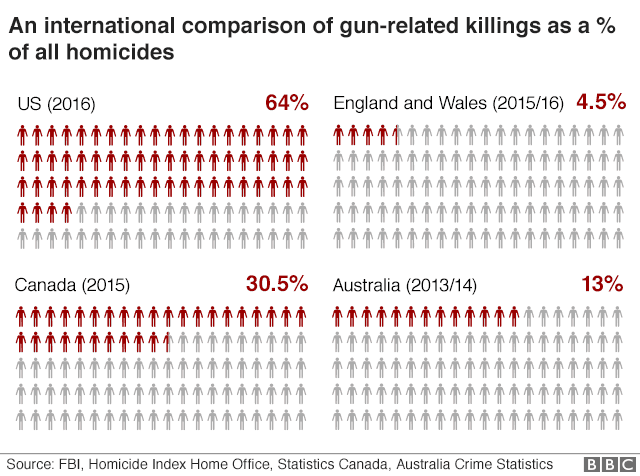 Homicides are taken here to include murder and manslaughter. The FBI separates statistics for what it calls justifiable homicide, which includes the killing of a criminal by a police officer or private citizen in certain circumstances, which are not included.

Who owns the world's guns?

While it is difficult to know exactly how many guns civilians own around the world, by every estimate the US with around 270 million is far out in front. 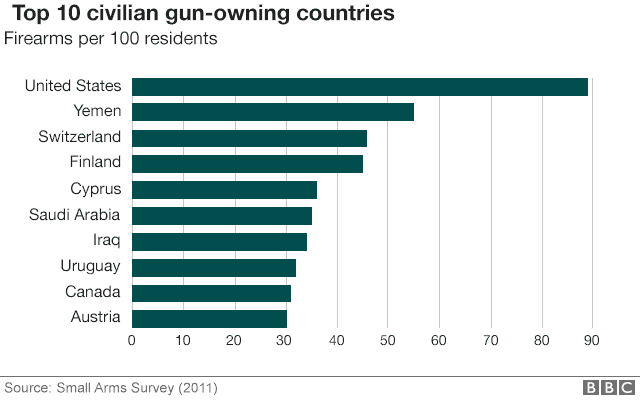 Switzerland and Finland are the European countries with the most guns per person - they both have compulsory military service for all men over the age of 18. Cyprus, Austria and Yemen also have military service.

How do US gun deaths break down?

There have been more than 90 mass shootings in the US since 1982, according to investigative magazine Mother Jones.

Up until 2012, a mass shooting was defined as when an attacker had killed four or more victims in an indiscriminate rampage - and since 2013 the figures include attacks with three or more victims. The shootings do not include killings related to other crimes such as armed robbery or gang violence.

The overall number of people killed in mass shootings each year represents only a tiny percentage of the total number. 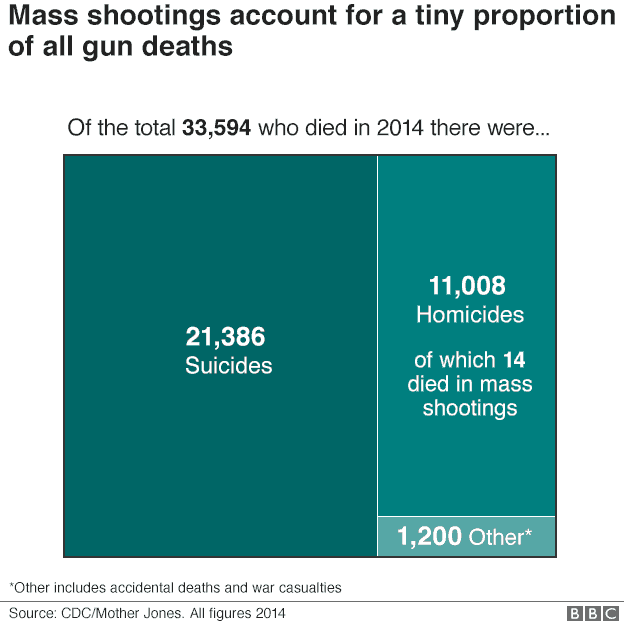 There were nearly twice as many suicides involving firearms in 2015 as there were murders involving guns, and the rate has been increasing in recent years. Suicide by firearm accounts for almost half of all suicides in the US, according to the Centers for Disease Control and Prevention.

A 2016 study published in the American Journal of Public Health found there was a strong relationship between higher levels of gun ownership in a state and higher firearm suicide rates for both men and women.

Attacks in US become deadlier

The Las Vegas attack was the worst in recent US history - and five of the shootings with the highest number of casualties happened within the past 10 years.

The Parkland, Florida, attack is the worst school shooting since Sandy Hook in 2012. 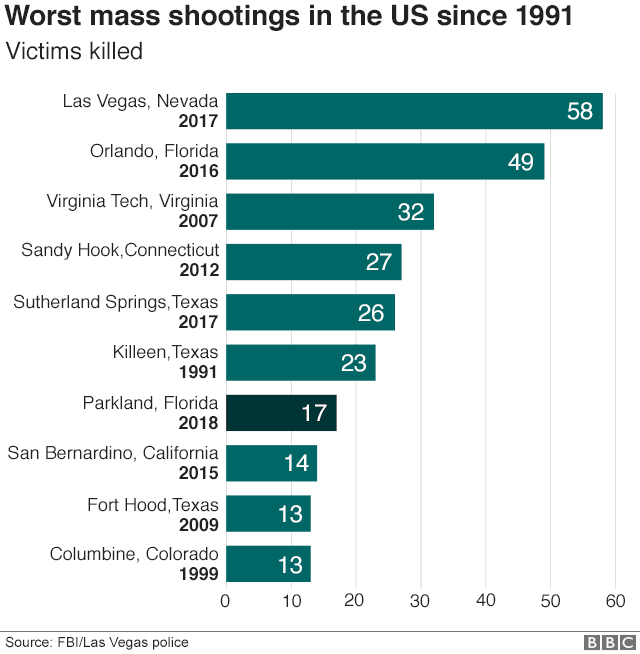 What types of guns kill Americans?

Military-style assault-style weapons have been blamed for some of the major mass shootings such as the attack in an Orlando nightclub and at the Sandy Hook School in Connecticut.

Dozens of rifles were recovered from the scene of the Las Vegas shooting, Police reported. 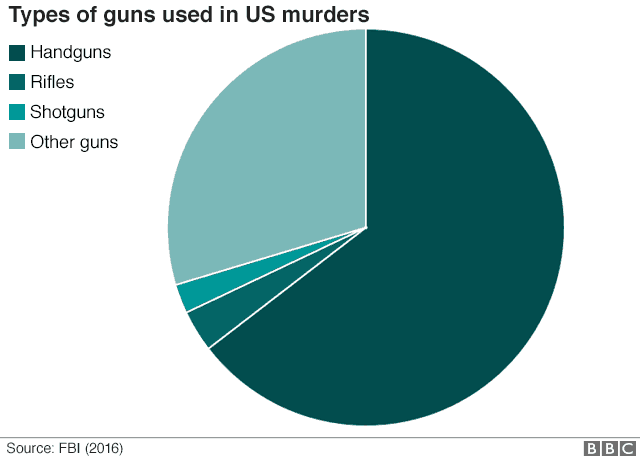 A few US states have banned assault-style weapons, which were totally restricted for a decade until 2004.

However most murders caused by guns involve handguns, according to FBI data.

How much do guns cost to buy?

For those from countries where guns are not widely owned, it can be a surprise to discover that they are relatively cheap to purchase in the US.

Among the arsenal of weapons recovered from the hotel room of Las Vegas shooter Stephen Paddock were handguns, which can cost from as little $200 (£151) - comparable to a Chromebook laptop. 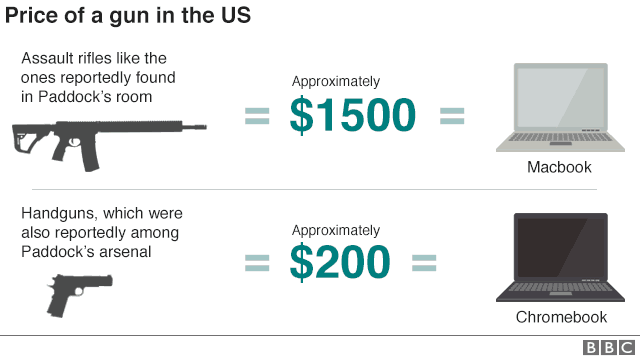 In addition to the 23 weapons at the hotel, a further 19 were recovered from Paddock's home. It is estimated that he may have spent more than $70,000 (£52,800) on firearms and accessories such as tripods, scopes, ammunition and cartridges.

US public opinion on the banning of handguns has changed dramatically over the last 60 years. Support has shifted over time and now a significant majority opposes a ban on handguns, according to polling by Gallup.

But a majority of Americans say they are dissatisfied with US gun laws and policies, and most of those who are unhappy want stricter legislation. 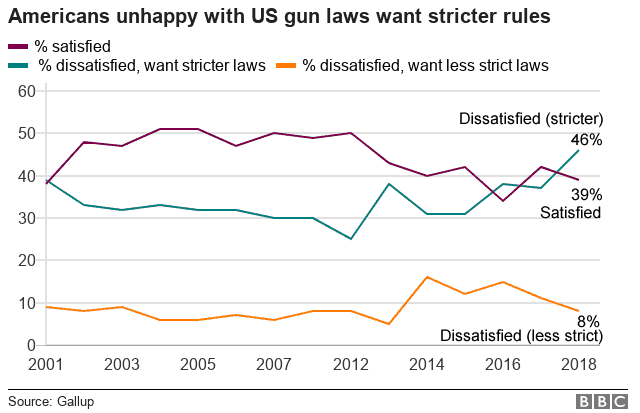 Some controls are widely supported by people across the political divide - such as restricting the sale of guns to people who are mentally ill, or on "watch" lists. 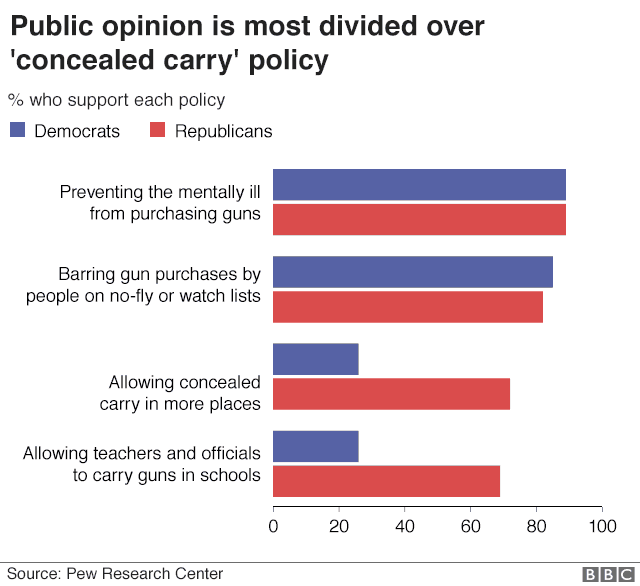 But Republicans and Democrats are much more divided over other policy proposals, such as whether to allow ordinary citizens increased rights to carry concealed weapons - according to a survey from Pew Research Center.

In his latest comment on the shootings, President Donald Trump said he would be "talking about gun laws as times goes by". The White House said now is not the time to be debating gun control.

His predecessor, Barack Obama, struggled to get any new gun control laws onto the statute books, because of Republican opposition.

The National Rifle Association (NRA) campaigns against all forms of gun control in the US and argues that more guns make the country safer.

It is among the most powerful special interest lobby groups in the US, with a substantial budget to influence members of Congress on gun policy. 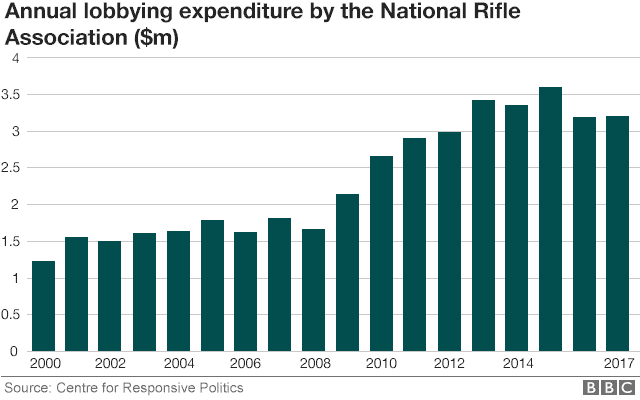 In total about one in five US gun owners say they are members of the NRA - and it has especially widespread support from Republican-leaning gun owners, according to Pew Research.

The chart shows only the recorded contributions to lawmakers published by the Senate Office of Public Records.

The NRA spends millions more elsewhere, such as on supporting the election campaigns of political candidates who oppose gun controls.