Surveillance investigators gather evidence on the subject in a covert manner so that the investigator is not discovered, potentially damaging the chances of solving the case. While on surveillance, private investigators use different techniques to remain unnoticed, not only by the subject, but the general public, who may call law enforcement when they see an individual acting in a suspicious manner. Trained investigators use this skill to collect information and provide the court evidence of wrong doing, the kind of proof that will stand up in court.

Additionally, the definition of surveillance is the monitoring or observation of behavior, activities and people for the purpose of influencing, managing, directing, or protecting them.

Ideally, a surveillance investigator wants to follow their subjects at a discreet distance. In quiet areas, back roads, late at night, small towns, cul-de-sacs, parks and other low traffic areas, surveillance is maintained at a greater distance. In busy areas, downtown metropolitan cities, shopping malls, restaurants, commercial buildings, and public events, surveillance is maintained at a shorter distance keeping the subject insight at all times. If the subject turns around, walked past them, look in a shop window or pretend to make a phone call. Avoid any sudden actions and do not stare at the subject as this may arouse suspicion.

Investigators should follow the subject’s vehicle approximately 2 to 3 car lengths behind and change lanes regularly. The subject or passenger may frequently look behind them, so use a buffer, a vehicle between you and the subject. If the investigator notices the subject vehicle making several turns or appears to be driving around the block, the investigator needs to end surveillance immediately to avoid blowing their cover.

Investigators on surveillance need to change their appearance to fit their surroundings. Wearing a nice suit while following your subject into a top restaurant may be appropriate, but you may stand out when working in a local tavern. It is a good idea to bring a change of clothes with you in your car and where a jacket that can is reversible. Remember, mingle in with the crowd rather than standing alone. It is common for investigators to where dark-colored or design free clothes to avoid being noticed. Think back to the last time you were in public and try to remember any faces that stood out. 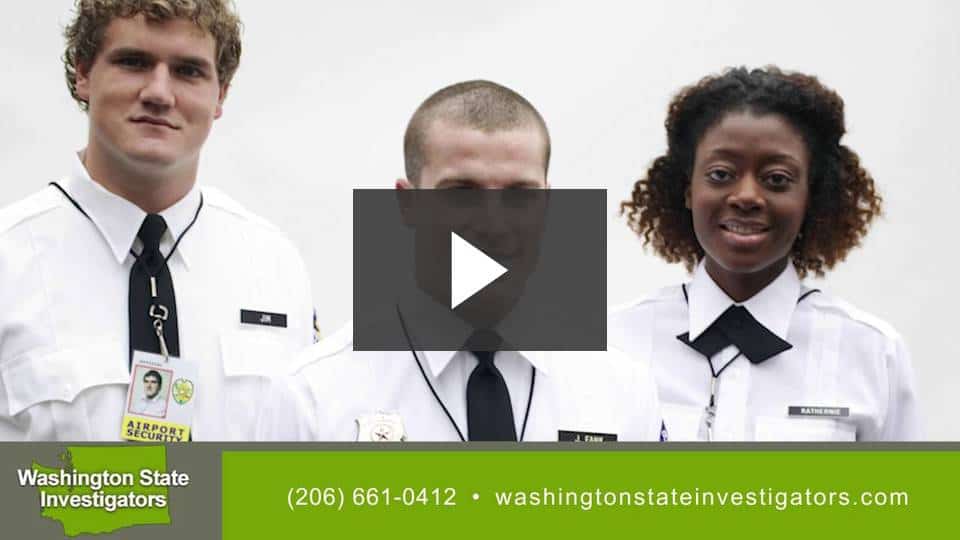 Many of us worry that surveillance affects our privacy and why balancing the act of security and privacy should only be attempted by a trained and licensed investigator. It’s important to stay on the right side of the law.

Back on topic, new privacy laws mean that surveillance equipment, audio, video, and other forms can be restricted when not performed by a private investigator. Washington State Investigators are trained and experienced professionals who stay current with laws regarding surveillance and privacy in Washington State.

Washington State Investigators provides covert surveillance and understands the legalities involved. To better understand this, we have provided this article to give you insight what a Private Investigator must be aware of when using this method to collect evidence.

What, you might ask, has this got to do with Private Investigations?

The plain fact is that every time you start an investigation into any individual you can guarantee that at one point or another you will commit some kind of collateral intrusion on someone other than your subject.

Usually, it’s limited to close family and friends but it may also be work colleagues or just simply the people sat around the subject in the local pub.

Photograph, record or witness any other person’s private information while looking at your subject and it’s technically ‘collateral intrusion’. It’s not just physical surveillance either; any details you may obtain during the course of you inquiries that are about another person, for example joint ownership of property or car is also, to some degree, collateral intrusion.

The next question will be, so what? Isn't this just a consequence and unavoidable result of any investigation?

Well yes, you’re right, but its how you deal with the information and what plans you put in place to reduce it that’s important.

The first step is to acknowledge that it will happen and that you are aware that it will happen. Secondly, build in a plan to reduce it. This will involve making sure that you and any other operatives on the operation understand what collateral intrusion is and that steps are taken to reduce it by tightly focusing you observations and inquiries on the subject. This could be as simple as not taking photographs of any members of the family unless you have a good operational reason to do so. Finally, if you do inadvertently obtain some information not relating to the subject or the investigation ensure that it is disposed of immediately and no further action taken toward that person. (It is good practice to have a policy that lays out the exact procedure for disposal and the recording of it).

Now, if that all sounds a little bit OTT then think again, it’s exactly how Public Authorities deal with issues of collateral intrusion and it is insisted on before an authority to carry out surveillance under RIPA is issued.

As we move to increase professionalism in the Private Investigation industry, it’s the type of standard that you should be striving for and I’m pretty certain, an ever more informed client base will start to insist on.

At the end of the day, licensing for the Private Investigation industry is about protection of individual’s privacy. The competency training and qualification for the license is more about knowing what you shouldn't do rather than what you can do.

If you suspect a spouse is cheating, an employee is dishonest, or need proof of harassment, it can be difficult to concentrate on everyday tasks at home or at work. Our investigators are here to help. Please call us if you have any questions about surveillance or other services we provide at Washington State Investigators.

Washington State Investigators understands
when opportunity and preparation meet you get results!

We invite you to call Washington State Investigators and get the results you want today.